No Condemnation! The cross and God’s courtroom

“Condemnation” is a word that lawyers are, at some level, familiar with. We know what it means, for instance, in criminal law, and the consequences of such a verdict for a defendant. We are also taught to identify weaknesses in the legal reasoning of a judge when we encounter an illegal or disproportionate decision.

If you are in a courtroom, either as a lawyer or just a viewer, you can feel the weight of a "guilty" verdict.  Even in our human justice system, which is fallible, it is a solemn and fear-inspiring word, isn’t it? Now think about the divine judgment, which will be a reality to every human being: a holy and almighty God who will judge our deeds and thoughts, and how we conducted our lives in light of his just law.

With that in mind, this verse from Romans presents one of the marvellous and glorious effects of Jesus Christ’s work for the believers, which is interestingly described in legal terms:

Rom 8.1 There is therefore now no condemnation to those who are in Christ Jesus (ESV)

The Apostle Paul is explaining what Christ has done for our justification, in other words, for the revocation of our condemnation.

In Colossians 2:13 we read: He forgave us all our sins, having cancelled the charge of our legal indebtedness, which stood against us and condemned us; he has taken it away, nailing it to the cross.

The only way to escape the condemnation was by the removal from us of that which demanded the sentence, namely our sin. How can that be possible? The answer is a magnificent truth of the Gospel: The sins of believers were transferred and charged to Christ.

On the cross, “Christ redeemed us from the curse of the law by becoming a curse for us”. (Galatians 3:13 ESV). By dying the death we deserved, and resurrecting on the third day, Christ can deliver us from the condemnation which the law brought upon us.

How can we benefit from Christ’s death and resurrection? Should we zealously follow the law to flee condemnation? Certainly not. Since all have broken God’s law, it rightly condemns us. If the law inevitably condemns us all, the justification of a sinner cannot be by the works of the law, but only by the grace of God through faith in Christ Jesus.

It means that you cannot try to collect evidence on your behalf as you advocate for your salvation in God’s courtroom. In fact, if you tried to do that, your case would be crushed by the overwhelming weight of evidence against you – for “there is no one righteous, not even one” (Romans 3.10 NIV) - and a guilty verdict would be the inevitable result.

However, if you believe and trust in the work of Christ by faith and follow him as your Lord, a unique legal transaction occurs. United to him by faith, his perfect obedience to the law is transferred and credited to you, the righteous requirements of the Law are satisfied, and we cannot be  condemned but are fully free from any penalty under the law.

Let us be mindful to consider that “no-condemnation” does not mean immunity from our daily battle over sin. In the present, we are not condemned, because our sin and its penalty have been owned and paid by Jesus Christ. But, until the Lord Jesus returns, there is a constant inward conflict with sin and temptations.

As Charles Spurgeon said: “The fact is, that believers are in a state of conflict, but not in a state of condemnation, and that at the very time when the conflict is hottest the believer is still justified”.[1]

The work of Christ on our behalf means deliverance not only from the guilt of sin in the last day, but also from its present enslaving power. Thanks be to God, because of his daily grace poured on us, we can overcome the temptations and grow in likeness of Christ.

I encourage you to rejoice in Christ’s triumph over our condemnation and the privilege that he granted us to be positioned “In Him”. 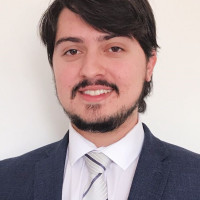 Felipe is the Coordinator of the UCCF Law Network and Director of Student &amp; Young Lawyers Ministries at the Lawyers' Christian Fellowship (LCF). He is a Brazilian solicitor and PhD candidate in …

View all resources by Felipe Carvalho

We use cookies on this site to enhance your user experience

By clicking any link on this page you are giving your consent for us to set cookies.